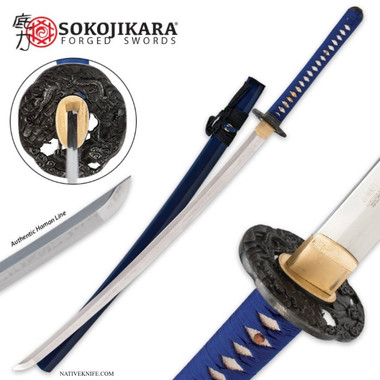 Like the deep blue sea - beautiful, tranquil, powerful and deadly all at the same time
Savage yet beautiful, tough yet graceful, Sokojikara's “Turbulent Blue" Katana is a wild animal in the refined trappings of a nobleman. This traditional Japanese samurai sword is beautiful, eye-catching and no doubt impressive from the very first glance. But many of the Turbulent Blue’s greatest treasures lie beneath its striking visual facade, and some - like clay tempering - are even altogether intangible. The Turbulent Blue is a veritable swordcraft goldmine, never ceasing to yield rich sword-wielding experiences from the moment you first grasp the tsuka to your inaugural cut and every time you brandish it beyond.

Made of blood, sweat, tears, and premium T10 steel
Sokojikara developed the Turbulent Blue with the serious swordsman in mind. Master smiths painstakingly hand forge every Turbulent Blue blade, and seasoned sword artisans carefully handcraft each tsuka and saya. From vigorously hammering the formless, molten steel to gingerly tapping in the tiny wooden mekugi, every step in the Turbulent Blue's construction receives the utmost care and precise attention to detail. Some of the world's - and history's - most revered, time-tested techniques are employed, and every material is top-of-the-line. A quintessential example is the Turbulent Blue's potent T10 tanto blade. One of the most sought-after high carbon steels in modern swordcraft, T10 alone would yield a blade with a nasty bite. But the Turbulent Blue takes it a step further, enhancing the blade with a time honored differential hardening technique called “clay tempering.” Unique to traditional Japanese swordcraft, clay tempering was developed centuries ago by Edo-period smiths and is integral to the katana's longstanding, well-earned reputation as the sharpest sword on earth. A T10 blade may have a “nasty bite,” but a clay tempered T10 blade like the Turbulent Blue’s is nothing short of devastating. And the “devastation” persists, battle after battle, cut after cut…

Sharpest in the world and stays that way, thanks to clay tempering
Clay tempering imparts edge retention that's simply without equal. Like a koi gliding through a still pond, the Turbulent Blue's blade slices through rolled bamboo tatami mats and even cinder blocks cleanly and effortlessly, suffering neither crack nor fissure and all-the-while retaining its razor sharp edge. The Turbulent Blue can withstand such punishing cutting trials thanks, largely, to clay tempering. Prior to the intense heat of the hardening phase, Sokojikara's seasoned swordsmiths coat the newly formed, unrefined blade with clay - a thin layer along the edge, a thicker layer on the body and spine. When the blade emerges from the hardening forge, the clay layers' contrasting thicknesses cause the steel to cool at slightly different rates, yielding two distinct hardness regions. The less-insulated edge cools faster, making it harder for superior edge retention and shear strength. The thicker, more insulating coat of clay causes the body/spine to cool more slowly, rendering it "tougher"- less brittle, more flexible and better equipped to absorb impact energy. Though conceptually simple, clay tempering requires skilled hands and years of experience. It’s a slow, labor-intensive process that has changed little since its 15th century origins. But when you see the Turbulent Blue in action, you’ll undoubtedly agree it’s well worth the time and effort.

Experience the Turbulent Blue, then pass it on
The Turbulent Blue has proven itself time and again, and it holds its own against any of today's most expensive katana, outperforming many. But the old cliché is true - "action" does indeed "speak louder than words," and at this unbeatable, downright unheard of price, why deny yourself the opportunity to experience Sokojikara's Turbulent Blue Katana for yourself? No matter how you use it, with proper care you can enjoy it for a lifetime, then pass it down to your children, grandchildren or great-grandchildren! The Turbulent Blue is heirloom-quality and built to be treasured by generations of your descendants - your legacy preserved in hand forged steel.